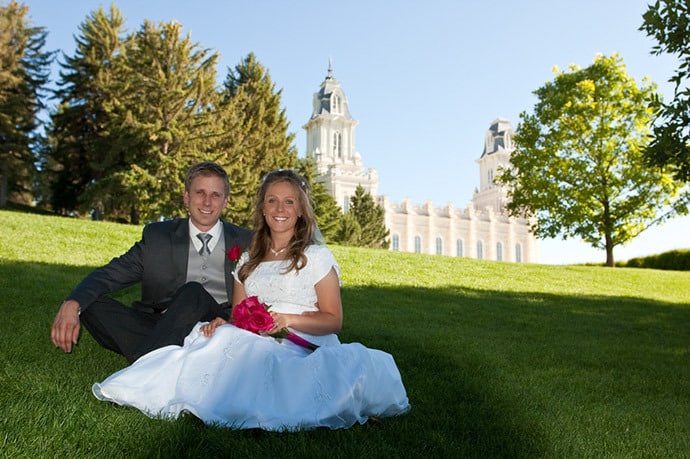 Unlike most churches, some Mormon marriage ceremonies are not open to non-Mormons.  This may seem quite “weird” to those who have never heard of such a wedding ceremony, but the purpose behind this approach to the marriage ceremony is actually quite revealing of how Mormons feel about the family.

What Happens at a Mormon Temple Wedding?

I have attended many Mormon weddings.  Frankly, I don’t think anyone would be surprised to see what happens during a Mormon marriage ceremony.

The couple being married invites friends and family to attend the wedding–generally 25 to 40.  All those who attend must be 18 years of age or older and be members in good standing of the church (as explained above).  Those who attend the wedding come in to “sealing room” in the temple where weddings are performed, and sit on chairs as they watch the ceremony.  Guests wear typical church clothes (white shirt and tie for guys, dress or skirt for women).  Temples are like libraries–everyone speaks softly so as not to distract others.

Once the group of friends and family is seated, the bride and groom enter the room.  The bride wears a typical wedding dress, but one which is modest and not revealing.

The ceremony begins with a very short speech by the priest.  Mormons call this priest a “sealer” because this person has authority from God to “seal” a couple for time and all eternity (meaning the marriage endures even when in heaven).  This usually only lasts about 5 minutes, and the sealer simply gives a nice message about how to have a happy marriage.

When the marriage ceremony begins, the couple kneels down at an altar.  This ritual represents their humility before God.  Then, the sealer explains that the wedding means that the couple will be married and asked to care for and love one another, and asks both the bride and the groom individually if they are willing to make that promise to one another and to God.

At this point, the bride and groom exchange wedding rings in cultures where this is common practice.  Technically, the ring exchange is not part of the official ceremony, but it is typically done.

Because the couple obviously wants to celebrate with those who may not be members of the Mormon faith, Mormon weddings almost always include a big wedding reception party and luncheon where the couple invites all of their friends and family who aren’t Mormon.

Not all Mormons marry in a temple.  To be married in the temple, the members of the church must actively attend church meetings and follow the commandments that they have promised to obey.

Members of The Church of Jesus Christ of Latter-Day Saints (the official name of what some refer to as the “Mormon Church”) who do not choose to meet this standard or who do not want an eternal marriage, may be married in any of the church buildings by a bishop.

Marriages performed by a bishop (not a sealer) in a church (not a temple) are not eternal.  They are performed with the same promise as weddings in other churches–the couple is married only until death does them part.

3 thoughts on “All About the “Weird” Mormon Wedding Rituals”