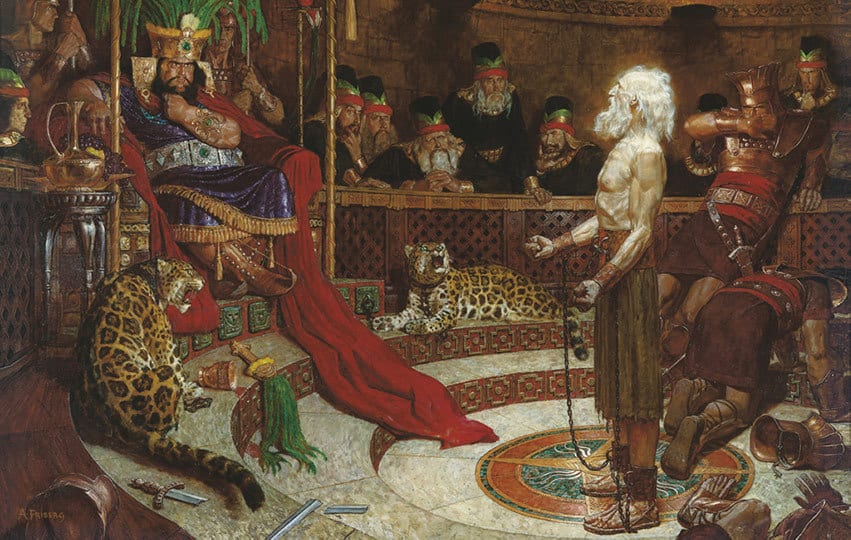 This week I’ve been reading in The Book of Mormon about Amulon.  I became confused at who exactly Amulon was, so I did some studying this week to clear it up.  Hopefully writing it this way will help you with your own study.

In The Book of Mormon, Amulon was a leading priest in King Noah’s court. After Noah’s death, he directed the priests of Noah in the wilderness and kidnapped 24 Lamanite daughters.  Amulon became a Lamanite leader after pleading for his life to the Lamanite king and ruled over Alma the Elder’s people in Helam for a time before they were delivered from bondage.

In Clear Language, What Is the Story of Amulon’s Life?

King Noah was the wicked Nephite king who burned Abinadi to death.  At his trial, Abinadi declared the truth of the Plan of Salvation to King Noah and his wicked priests.  From that testimony, Alma the Elder was converted, but Amulon and the other priests were not convinced.

It’s likely that Amulon played a roll as the leading priest in Noah’s court, in killing Abinadi.  In fact, King Noah was afraid of Abinadi and was going to release him, but it was the priests who convinced the king to kill Abinadi because Abinadi defied the king.

When Abinadi died, he prophesied that King Noah would die the same death (Mosiah 17:11-20).  Abinadi said:

“Even as ye have done unto me, so shall it come to pass that thy seed shall cause that many shall suffer the pains that I do suffer, even the pains of death by fire; and this because they believe in the salvation of the Lord their God.  … [Y]e shall be afflicted with all manner of diseases because of your iniquities.  Yea, and ye shall be smitten on every hand, and shall be driven and scattered to and fro, even as a wild flock is driven by wild and ferocious beasts.  And in that day ye shall be hunted, and ye shall be taken by the hand of your enemies, and then ye shall suffer, as I suffer, the pains of death by fire.“

After Abinadi’s death, Alma the Elder ran off from the king’s court and began baptizing people in the wilderness.  Amulon remained with King Noah.

There was an insurrection in King Noah’s kingdom.  The people rose up against the wicked king and Gideon swore he’d kill King Noah.  Gideon chased King Noah up to the tower and as he was about to slay him, King Noah spots the Lamanites are coming to attack the city.   Gideon spares Noah’s life so he can lead the people in battle (Mosiah 19:2-7).

Noah instructs the people to run away from the attacking Lamanites.

After King Noah ran away from wives and children during a Lamanite attack, the priests turned on King Noah and burned him to death as was foretold by Abinadi who suffered the same fate at the hands of King Noah.

King Noah was succeeded in part by his son, Limhi. The other part of the priests of Noah went with Amulon.

They became the Amulonites and went into the wilderness where they later took 24 Lamanite women. Amulon convinced the Lamanite king not to kill him. The king of the Lamanites allowed Amulon to be a puppet ruler over Alma the Elder and his people in the land of Helam, where Alma’s people were taxed and prohibited to pray.

Alma the Elder’s people are delivered from bondage quickly because of their obedience. The Lord caused a deep sleep to come upon their guards and they sneaked out.

The rest of the story of Amulon’s life isn’t recorded. We have mentions in the book of Alma of the Amulonites, but no mention of what happened to Amulon himself.

I have to think, however, that Amulon’s fate wasn’t a good one when the king of the Lamanites found out that he lost all of the slaves. Perhaps he too was burned to death like his father, Noah?