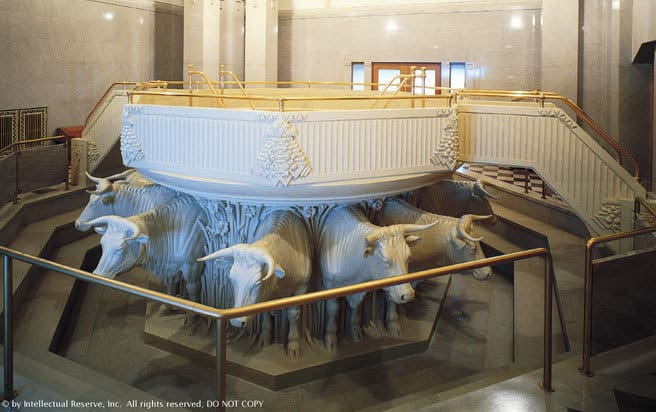 In all Mormon temples, there are statues (usually white stone) of what appear to be bulls under the baptismal font.  Technically, they aren’t bulls at all, but you’d be forgiven for not understanding the anatomical differences between bulls and oxen.

The “bull” statues (again, actually oxen) represent the twelve tribes of Israel, who were promised great blessings by God.  When a person is baptized, she is adopted into one of the twelve tribes if she is not already born into one.  The purpose of the bull sculptures is merely to remind those who participate in temple baptisms of the promises they can receive.  To understand this symbolism fully, we need to cover a little Biblical history.

Understanding the Biblical Background behind the Sculptures

In Solomon’s temple, there were twelve oxen and a baptismal font (See 1 Kings 7, and 2 Chronicles 4) known as the molten sea.  That same tradition is continued in Mormon temples today, where a baptismal font is placed on the back of sculptures of 12 oxen.

Abraham’s grandson was named Jacob, but his name subsequently changed to Israel.  Israel had twelve sons, and each of them were given blessings by their father before his death.  One was blessed to rule until the coming of the Messiah (Judah), another was promised the Priesthood (Levi), etc.  These children and their descendants made up the twelve tribes.

Despite periods of righteousness, the twelve tribes of Israel (Abraham’s lineage) rebelled against God.  God afflicted and scattered these people across the earth.  This was an important Biblical event that had been prophesied and spoken of by the prophets (See Leviticus 23:33, Deuteronomy 28, etc).

The Lord has promised to gather the descendants of the family of Israel again before Christ’s second coming (See Ezekiel 28:25 as an example–there are many).  Although some literal gathering of these people into one place may occur, the gathering of Israel is mostly a return of the Lord’s promised people to the family of faith.

Why are the Twelve Tribes Represented by Oxen?

Oxen are often used in scripture as representing the twelve tribes of Israel.  The Children of Israel gave gifts and offerings at the dedication of the tabernacle.  The gifts were carried in six wagons by twelve oxen.

“Almost one hundred years after the temple was constructed, King Ahaz of Judah remodeled the “sea” by removing the oxen and setting the font upon a stone foundation. (See 2 Kgs. 16:17.) The original oxen or their replacements may have been restored later as the support for the font; Jeremiah reported that the Babylonians destroyed the “twelve brasen bulls.” (See Jer. 52:17, 20.)” [Source: Edward J. Brandt.  Ensign, March 1993]

10 thoughts on “All About the Bull Sculptures in Mormon Temples”