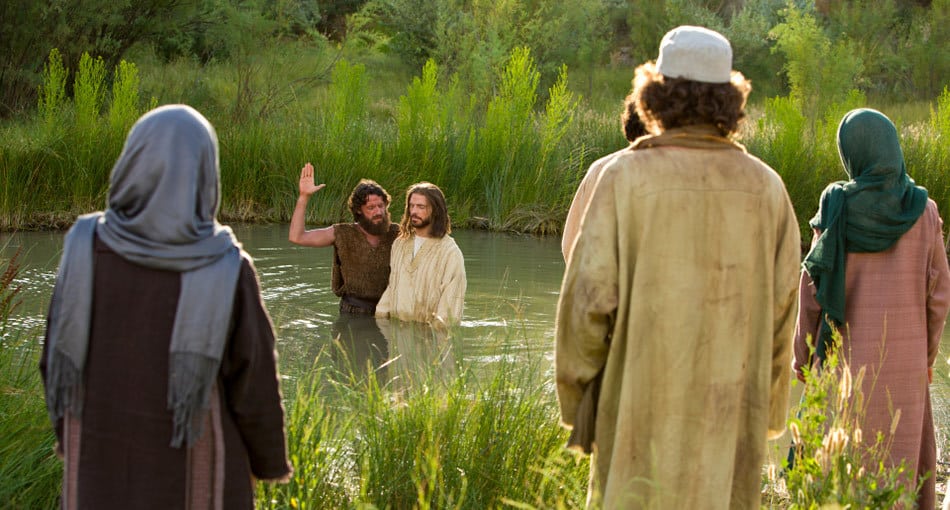 As a life-long Mormon, I’m frequently asked about my belief in the Trinity.  I appreciate you taking the time to understand our beliefs, so I’ll do my best to not only explain what we believe, but why we believe the Bible supports that view.

Mormons believe in God the Father, His Son Jesus Christ who is the Savior of the world, and in the Holy Spirit.  We believe that they are three separate people who are perfectly united in their perfection and purpose.

The Trinity is the teaching that the supreme being is “one God in three Divine persons.”  Though the details of this theology differ between religions, the basic statement of three divine persons acting together as a godhead is something Mormons agree with.  We believe God, Christ, and the Holy Spirit are separate and distinct individuals just like you and I are separate individuals; however, that Christ, God, and the Spirit are part of a godhead and are entirely united in their perfection and purpose.

As Bill Forrest said, “To insist that a belief in the Trinity is requisite to being Christian, is to acknowledge that for centuries after the New Testament was completed thousands of Jesus’ followers were in fact not really ‘Christian.’”

Mormons Believe the Bible Shows God, Christ, and the Spirit Are Individuals

My purpose in writing this article is not really to convince you of anything.  It is merely to help other Christians to understand why we, as Mormons, are Christian.  Mostly, I’m just grateful that there are good people in the world like you who seek to UNDERSTAND other people’s beliefs instead of simply belittling them.  Thank you for taking the time to read this.

It is difficult for me to read the Bible and imagine how it could be interpreted to show God, Christ and the Spirit being literally the same person.

When Jesus Christ suffered for our sins in the Garden of Gethsemane, he prayed to God saying, “Abba, father, all things are possible unto thee; take away this cup from me; nevertheless, not what I will, but what thou wilt.”  He again prayed to God while on the cross: “My God, my God, why hast thou forsaken me?” (Matthew 27:46).  Who was Christ praying to so earnestly?  Himself?  I think not.

When Christ was Baptized by John the Baptist in the River Jordan, when he came up out of the water, the “Spirit of God descending like a dove.”  Then, a voice from heaven pronounced to the crowd “Behold, this is my beloved Son, in whom I am well pleased.” (Matthew 3:16-17)  Did Christ morph into a bird while he was a man, and then morph his voice into heaven to tell the people that he was pleased with himself?  Again, it’s difficult for me to read the Bible and honestly come to the conclusion that God, Christ, and the Spirit are the same person.  It simply defies logic.

On the mount of transfiguration, Christ came into the presence of God before Peter, James, and John.  As Christ spoke to his disciples, “a bright cloud overshadowed them: and behold a voice out of the cloud, which said, This is my beloved Son, in whom I am well pleased; hear ye him.”  Christ was a mortal and could die at this time.  He was transfigured because he came into the presence of the immortal God, who audibly spoke to announce Christ.  Was Christ talking to himself?

Christ is declared numerous times to be the son of God.  It takes a tortured reading of the Bible to believe that he impregnated his earthly mother with himself and was then born to her and was the son of himself.

Are There Bible Verses Which Lend Evidence to a Trinity?

Yes, there are certainly individual Bible verses which seem to support the doctrine of the Trinity (God, Christ, and Spirit as one person).  However, a plain reading of the Bible narrative shows so clearly that they are separate beings that I find it difficult to understand how it could be understood otherwise.

A good student of the Bible may be wondering about some verses which seem to show a different viewpoint.

There are many other verses as well, but these verses will at least hopefully give you an idea of what verses show a potential counter-point, and how Mormons respond to them.

It was not until the Nicaean Council three hundred years after Christ when the trinitarian theology was codified.  There is abundant evidence that early Christians did not hold that belief.

The full name of the so-called “Mormon Church” is “The Church of JESUS CHRIST of Latter-Day Saints.”  When I was baptized, I was baptized “In the name of the Father, and of the Son, and of the Holy Ghost.”  On Sundays, we remember the Lord’s Last Supper by partaking of the sacrament.  I spent two years as a full-time Mormon missionary in Brazil teaching people to repent and follow God’s commandments.

One could certainly argue that I am not a “Trinitarian” for not believing that God, Christ, and the spirit are physically the same person; however, arguing that I am not a “Christian”, despite believing in Christ and striving to follow him, defies logic.

The dictionary says a Christian is “a person who has received Christian baptism or is a believer in Jesus Christ and his teachings.”  When I was baptized, the person performing the baptism said I was baptized “In the name of the Father, and of the Son, and of the Holy Ghost.”  And, I believe in Christ.  So, how can anyone say Mormons are not Christian when we perfectly fit the very definition of the word?

The second mention of the word “Christian” in the Bible is when Agrippa tells Paul “almost thou persuadest me to be a Christian.”  Yet today, many Christians have taken to convince me that I am NOT Christian.

What is a Christian?  A Christian is a believer in and follower of Jesus Christ. I do believe in Christ and strive to follow him.  Why are so many people interested in convincing me that I don’t believe in Christ?

Certainly, if someone from another Christian religion became interested in my church, I wouldn’t start by convincing them they don’t believe in Christ!  That runs counter to my objective in teaching the gospel.  I understand that all Christian religions believe doctrines different from each other, but I fail to understand why we cannot acknowledge that we do, at least, have our central tenet in common: that Jesus Christ is our Savior.

If You Wish to Understand What Mormons Believe About Christ…

First of all, THANK YOU for clicking on this article and taking the time to understand our beliefs.  That shows to me that you’re the sort of person who is truly interested in learning rather than simply judging others.  Thank you.

Several years ago, the leadership of the LDS Church put together a statement called “The Living Christ.”  It is quite short, but fully explains our belief in Christ as our Savior.  You can read it here.  Nothing else will help you to understand our beliefs more completely than taking 2 minutes to read this document.

One thought on “Do Mormons Believe in the Trinity? A Mormon explains.”