Recently I have seen lots of headlines like, “Mormons don’t want you calling them Mormons anymore.” Or, “Stop Saying ‘Mormon,’ Church Leader Says.” All of these articles were based on a recent announcement and push from President Nelson and other Church leaders. So, if you are not a member of The Church of Jesus Christ of Latter-day Saints, then what should you call me?

The recent announcements may have caused some non-Latter-day Saints to wonder, “What should I call my Mormon friends?”

Russell M. Nelson Asks For a Change of Focus

The Lord has impressed upon my mind the importance of the name He has revealed for His Church, even The Church of Jesus Christ of Latter-day Saints. We have work before us to bring ourselves in harmony with His will.

As I have read what others are saying about President Nelson’s announcement, I have found some humor in their perspective. For example, the New York Times called it “abrupt,” but then pointed out that Church leaders have emphasized the formal name of the Church since the 1990’s.

Man, if almost three decades is abrupt, I would hate to see what the NYT considers a long-term approach.

In a style guide released with the official announcement, Church leaders requested, “Please avoid using the abbreviation ‘LDS’ or the nickname ‘Mormon’ as substitutes for the name of the Church, as in ‘Mormon Church,’ ‘LDS Church,’ or ‘Church of the Latter-day Saints.'”

Truth be told, this emphasis is nothing new.

In fact, the term Mormon was first used as a derisive nickname by those that hated the Church and its members. In this context, it really was the equivalent to some of the derogatory names that were given to minority groups in the nineteenth and twentieth centuries that are considered politically incorrect in today’s vernacular.

Although the members of the young Church eventually embraced the nickname, the actual name of the church has been the Church of Jesus Christ of Latter-day Saints.

Over the years, members of the Church have been reminded of the official name.

For most of the last 30 or 40 years, leaders have embraced the idea of being called Mormons. They have insisted, however, that the Church not be referred to as the “Mormon Church.”

“By divine directive, the title of the church bears the sacred name of Jesus Christ, whose church this is,” he said then. “He so decreed more than once. Nearly two thousand years ago, the Lord said, ‘Ye shall call the church in my name; … And how be it my church save it be called in my name?'”

In 2001, the First Presidency of the Church issued the following statement:

“The use of the revealed name, The Church of Jesus Christ of Latter-day Saints (D&C 115:4), is increasingly important in our responsibility to proclaim the name of the Savior throughout all the world. Accordingly, we ask that when we refer to the Church we use its full name wherever possible. …

“When referring to Church members, we suggest ‘members of The Church of Jesus Christ of Latter-day Saints.’ As a shortened reference, ‘Latter-day Saints’ is preferred.”4

“[Latter-day Saints] talk of Christ, we rejoice in Christ, we preach of Christ, we prophesy of Christ, and we write according to our prophecies, that our children may know to what source they may look for a remission of their sins.”

Obedient to revelation, we call ourselves The Church of Jesus Christ of Latter-day Saints rather than the Mormon Church. It is one thing for others to refer to the Church as the Mormon Church or to us as Mormons; it is quite another for us to do so.

President Nelson seems determined to see that the emphasis sticks this time.

It will be interesting to see what happens with some of the well-known staples in the Church like the Mormon Tabernacle Choir or the Church’s websites like www.mormon.org or www.mormonandgay.com or www.mormonnewsroom.org

What is a Latter-day Saint?

Latter-day Saints do not use the word “saint” in the same way as most religions in the world. The dictionary defines a saint as “a person acknowledged as holy or virtuous and typically regarded as being in heaven after death.”

This statement—“a saint is a sinner who keeps on trying”—should reassure and encourage members of the Church. Although we are referred to as “Latter-day Saints,” we sometimes flinch at this reference. The term Saints is commonly used to designate those who have achieved an elevated state of holiness or even perfection. And we know perfectly well that we are not perfect.

The “saint” in Latter-day Saint simply refers to the fact that we see ourselves as disciples of Jesus Christ.

“Latter-day” refers to the timing of our in regard to God’s plan for the earth and His children. We believe that this is the final and last dispensation before the Second Coming of the Savior. Thus we say that we live in the “last days” or the latter-days.

Who was Mormon and why is that the nickname for members of the Church?

The term Mormon was first used in the 1830’s as a slanderous term for members of the Church of Jesus Christ of Latter-day Saints. It stemmed from the Church’s use of the Book of Mormon as an additional book of scripture.

Mormon was a prophet that was responsible for compiling the record that ultimately became the Book of Mormon (hence the name).

Eventually, the Latter-day Saints adopted the name, but I am not exactly sure when it lost its slanderous tone.

To be honest, when I am away from Utah, I introduce myself as a member of the Church of Jesus Christ of Latter-day Saints and most people just stare at me. When I mention the “Mormons” they often nod their heads in acknowledgment.

Many, many people throughout the world are familiar with the Mormons. This recent effort seems like we are trying to help people understand that Jesus Christ is at the core of our teachings and theology.

Why Try to Change What People Call the Church?

It seems like there is always speculation about why the Church does this or that. My experience is that more than not, the speculation is unreliable. For example, one explanation for the change is that the Church is trying to distance itself from the word “Mormon” because of the musical “The Book of Mormon.”

This idea is like shooting from the hip in a sniper competition. I mean, first of all, the Church has been emphasizing the formal name of the Church for decades. And second, the Church was not afraid of the musical. The Church purchased advertising in the playbill. Missionaries waited for those leaving the play handing out copies of the Book of Mormon. Books are always better than the movie! 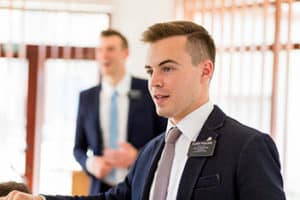 But that begs the question: why are the Church leaders asking people to change the way they refer to the Church and its members?

While our beliefs about Jesus Christ may differ from traditional Christianity (mainly in our views regarding the Trinity), Latter-day Saints believe that

These are just the tip of the iceberg, but they draw attention to the central figure of Latter-day Saint Theology: Jesus the Christ

Joseph Smith, the first Latter-day Saint Prophet in this dispensation, taught the members of the Church, “The fundamental principles of our religion are the testimony of the Apostles and Prophets, concerning Jesus Christ, that He died, was buried, and rose again the third day, and ascended into heaven; and all other things which pertain to our religion are only appendages to it.”

As a member of the Church, I feel like the purpose of the change is to draw more attention to the Savior.

What about the “Mormon Trail,” “Mormon Tabernacle Choir,” or “Mormon.org”?

I am not sure what is going to happen with these well-known “Mormon” names. I imagine that some of them will stick around and others will find a way to be updated so that the focus shifts to the Savior, Jesus Christ.

Sheri Dew pointed out in an interview with Deseret News, “One major problem with every nickname we have used through the years is that they all cut out the name of Jesus Christ.” She later added, “The other problem is that the Savior himself told us what he wanted the church to be called. We are followers of Jesus Christ, and we need to be willing to declare it.”

I imagine that it will take a long time to get most people in the Church to get past the habit of calling members of the Church Mormons or referring to the “Mormon Church.”

If you have friends that are members of the Church of Jesus Christ of Latter-day Saints, don’t worry too much about what you call them. I don’t know anyone in the Church that would be offended if you slipped and called them a Mormon.

To tell you the truth, members of the Church are struggling to make the change as well. You will probably hear many of us slip and refer to ourselves as Mormons from time to time.

If you want to have some fun with them when they slip up, give them a quizzical look, and then say—with a look of sudden understanding—“Oh, you mean Latter-day Saint.”

You will probably get a good laugh.

The New York Times made it clear in their article covering the announcement that they have no intention of honoring President Nelson’s request.

For others that may wish to write about the Church in public or academic venues in a respectful manner, here is a link to the Church’s official style guide.

Here are some other suggestions from the style guide:

Brian Ricks is a father of 6 living in Saratoga Springs, Utah. He is the author of a soon-to-be-released book on James E. Talmage, and has a doctorate in theology from Brigham Young University. In his free time he chases deer and eats Oreos.