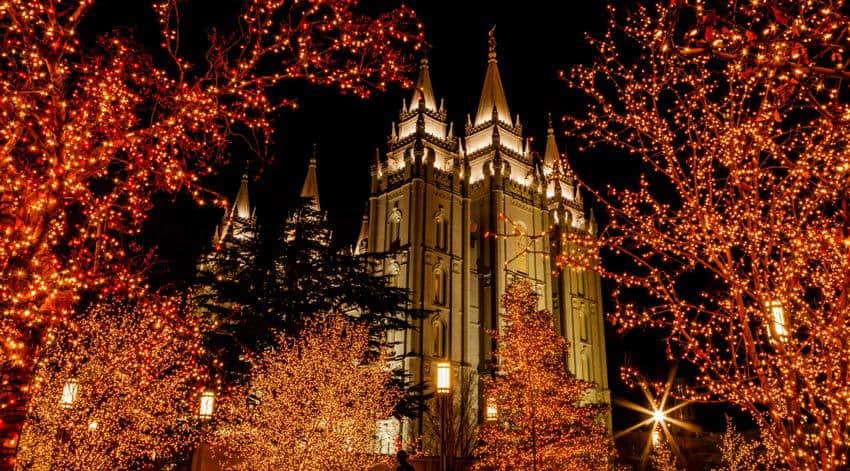 As a life-long member of The Church of Jesus-Christ of Latter-Day Saints, I have been asked many times what makes my church different from other religions.

Members of The Church of Jesus Christ share many beliefs with other Christian religions.  We believe in Jesus Christ and look to him as our Savior.  We study and seek to follow the Bible.  The biggest difference, however, is that we believe that God has established his church again on the earth with a living prophet and 12 apostles who are authorized by God to lead the church.  The authority of a living prophet has given us many revelations about God’s plan for us and how we can best follow Him.  For example, the prophet Joseph Smith received The Book of Mormon: Another Testament of Jesus Christ, through revelation from God.

In the rest of this post, I hope to explain more about how we differ from other churches, and what things are the same.

What Do Mormons Believe Compared to Other Christians?

Priesthood authority is probably the single most important difference between our faith and that of other great Christian religions.  The “priesthood” is God’s authority, delegated to man, to act in His name to perform His works here on earth.  In the Old Testament, this priesthood was given to Aaron, Melchizedek, and all the prophets.  The priesthood is the power that allowed Moses to walk through the Red Sea on dry ground, and also the power that Christ used to resurrect.

Christ’s death was not the end of God’s love for us, but a beginning.  Christ overcame death and sin, but the people still needed to learn of Christ, repent of their sins, be baptized, and come unto God.  Just as God did in ancient times, he continues to call prophets today.

Joseph Smith was called by God to be a prophet in 1820, and founded our church.  After Joseph Smith was brutally martyred as an innocent man, other prophets succeeded him.  Today, the living prophet and president of The Church of Jesus Christ of Latter-Day Saints is Russell M. Nelson.

This priesthood is the most significant differentiating factor in our church.  We believe that God himself has selected our prophet and twelve living apostles to guide us.  We believe God has given us authority for baptisms, and to seal families together in a wedding that lasts forever.  It is this authority that allows the prophet to say “Thus sayeth the Lord.”

The Book of Mormon and its Relationship to the Bible

The Book of Mormon is the record of people that lived in the Americas from approximately 2000 BC until 600 AD. This was the same time as much of the Old and New Testament in Jerusalem.

The first example is of the Brazen Serpent. If you recall, in the Bible we read of a time when the people fell ill due to venomous snake bites and needed to be saved.  Moses got a brass serpent and raised it up high and commanded all the people to look upon it. If they would look upon it, they would live (Numbers 21). The Bible ends the story right there. It does not give us the resolution. In the Book of Mormon, we see the same story told but one additional detail is given. Many of the people did not look at the brass Serpent and died because of the simple mess of the way.

The second example is one of clarification of what is taught in the Bible. In the Book of Mormon, there is a chapter that directly answers the question of if a child needs to be baptized (Moroni 8). The scripture specifically says that they do not for they are alive in Christ. This teaches us the purpose of baptism is a to enter into God’s path. Those who are under the age of accountability will automatically be saved in the kingdom of God.

If you have never read the book of Mormon, I can see why it may feel strange to have a different book other than the Bible if that is what you are used to. I can see why some people may feel that way, but I would encourage you to just read it and decide for yourself. I have found the Book of Mormon to bring me closer to Christ and to give me encouragement and knowledge.

Differences In How Mormons Live Compared to Other Christians

Because Mormons believe that there is a living prophet and 12 apostles who are called of God to lead our church, we listen to the revelations that the prophet receives from Heavenly Father. Generally, the prophet teaches us simple, important principles to follow in order to follow Christ.  Sometimes, the revelations are more specific and guide us to live in a way that is different from others.

For example, Mormons don’t drink alcohol, coffee, tea, or use tobacco.  We are taught to keep our bodies free from addictive substances so that our spirits can become the masters of the flesh so that we may live in accordance with God’s will.  We also follow God’s commandment in the Bible to keep the Sabbath Day holy.  We don’t shop, work, or pursue recreation on Sundays, but instead go to church, spend time with our family, study the scriptures, and rest.

I’ve written a complete list of things that Mormons don’t do, which would be a good place to understand the commandments that we follow as members of the church.

Most of the way Mormons live is very normal.  We enjoy hobbies, work in a variety of different fields, and get addicted to watching The Office just like you do.  We follow the 10 Commandments and generally try (not always successfully) to be good people.  The main differences are in the commandments that we follow because of our firm belief in a living prophet.

How Did the Mormon Church Originate?

To a Mormon, this is actually a trick question. It could be tempting to say that the church was started in 1820 when Joseph Smith was visited by Heavenly Father and Jesus Christ and eventually was commanded to restore the church on the Earth. It is that point of restoration that makes this a trick question. We believe that the church today is the exact same church that Jesus Christ set up on the earth with 12 Apostles, and also the same church that Heavenly Father established through Adam in the beginning.

We believe that when Jesus Christ establish the church in Jerusalem before his death, that many of the people followed him but others rejected him. Just as the people killed Jesus Christ, they also killed his Apostles after Christ’s death. In the Bible, we read about this. As we see the Apostle Paul in later years trying to keep the church going, but facing continuing problems and apostasy as soon as he left an area.

Eventually, God’s authority of the priesthood was taken from all of the Earth when the apostles and prophets were killed off. This started a long time on the Earth where there was no established church or profit. This is similar to times in the Bible when the prophets such as Moses Noah and others were rejected.

In God’s mercy, He restored the Church again to the Earth by calling the Prophet Joseph Smith to do so. We believe that Joseph Smith was a prophet of God just as Moses Noah Abraham Isaac and Jacob. Since the death of Joseph Smith, there has always been a leader of our church who is a profit. Today, the prophet is Russell M. Nelson.

What Makes Mormons Believe in a Living Prophet?

In the Book of Mormon, one of the very last versus invites people to read the book of Mormon and then to pray to God and ask if the things taught in the book are true. No Mormon is asked to believe on Blind Faith. We believe that we can know for ourselves what is true through Revelation from God.

The same can be true of a testimony of a living prophet. The Prophet speaks to the church regularly in the church’s General Conference and through other means. We can hear the things that the prophet teaches and pray to God for ourselves to know if they are true.

Frankly, it would be crazy for someone to change their life to obey commandments such as this without first developing a testimony in God’s restored church, and that there really is a prophet called by god alive today.  It is for that reason that I have no problem whatsoever in keeping this commandment–I first developed my belief through prayer.  Knowing that the prophet is actually called of God, I’m perfectly happy to obey the commandments.  They make my life happier and make me a better person.
Take a few minutes and watch this speech by our prophet, Russel M. Nelson and see what God makes you feel.  He is merely a normal person just like the rest of us, but I believe that just as God did in ancient times as he chose apostles and prophets in the Bible, he has called this man to be a prophet today.  He teaches us how to live our lives in a way that will bring us closer to our Savior Jesus Christ.

4 thoughts on “What Makes Mormons Different Than Other Christian Churches?”